Ask about our Banquet rooms

Ask about The Kingston House Caterers

Over the past five decades lives have been enriched through The Kingston 1686 House restaurant and we are proud to be an active partner in continuing to maintain and share our home and its place in American history.

-Owner and Proprietors of the Kingston 1686 House; Marlene and Steve Gillespie 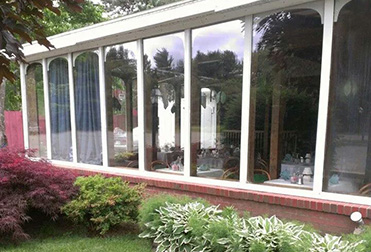 On any giving Sunday morning if you happen to be traveling down Kingston’s Main Street by the plains, slow down, roll down your windows as you may get a whiff of down-home cooking as The Kingston House prepares their traditional Sunday breakfast buffet.

The Kingston 1686 House is committed to serving our community. Owner & Proprietor Marlene Gillespie looks forward in helping you to plan your next special occasion. The Kingston House offers two wonderful venues; “The Jacob Room” and “Main Street Tavern” which overlooks the historical Linden tree. 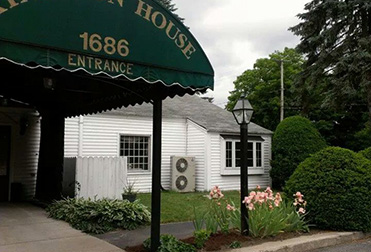 Now in its fourth century, the Kingston 1686 House restaurant is the oldest house in Kingston NH and one of the oldest in America. It is one of a few remaining architectural examples in the country of a full two-story house with an arch-supported central chimney, four fireplaces and a superimposed "hipped" roof. The original wide pine floor boards, Indian shutters, nine over six windows with many old panes still remaining, the beehive bake-oven, the hand cut beams, the pulpit staircase, and such later period additions as the fireplace paneling and the sterling silver front door handle.

In 1716, lchabod Roby, Indian fighter, cordswainer and Town Selectman, conveyed the house to the first Minister of Kingston, the Rev. Benjamin Choate (Harvard, class of 1703). It was used as the parsonage and remained with the Choate family until 1777.

Dr Josiah Bartlett, a resident of Kingston, signer of the Declaration of Independence, first Governor of the State of New Hampshire, and first to vote for Independence in Philadelphia, returned home from that historic event with some seedling trees where he planted a "European Linden tree" on the southwest side of the Kingston house in memory of the home owner and friend Reverend Benjamin Choate's wife who had died that very spring. 237 years later you can see Josiah Bartlett's seedlings as the Linden Tree stands proudly tall outside the southeast side of The Kingston House grounds.

Both the United States and the Linden tree are now over 237 years old. Ironically, Colonel Ebenezer Stevens, former commander of the King's Regiment in New Hampshire, political opponent of Dr. Bartlett, and a Tory by inclination, acquired the property in 1777.

Simion P. Clark purchased the home in 1836 and it was the homestead of the prominent Clark family for more than 117 years. The two original wings were moved to other locations and a covered extension was added connecting house and barn fireplaces and a superimposed "hipped" roof. The entire complex was converted to a restaurant in 1972.

The original barn was extended in 1979. The banquet room seats 100 guests, and named the Jacob Room after the owner’s grandson. The Kingston 1686 House later extended the barn to incorporate a solarium-style dining room which is open for dinner, Sunday brunch and private parties.

Throughout all this, the main house has remained intact. Whichever one of the seven dining rooms you use, in the old house, the extension, the barn of the Linden Room, we trust you will relax, partake of our superb food and beverages, reflect over the centuries that this house has stood in its majestic simplicity and thereby enhance your dining pleasure.

The more you know of your history, the more liberated you are.